Why a Standing Desk?

By now almost everybody with internet access must have heard of standing desks - taller-than-usual desks that you work at while standing up. They have been hailed as a route to better health and posture, and plenty of people claim higher productivity since switching to a standing setup.

The only way they could make it sound better is if every standing desk came with an infinite supply of sandwiches and beer.

It's not a new fad either - Ernest Hemingway, Benjamin Disraeli, Winston Churchill, Charles Dickens and Virginia Woolf all worked standing up.

Other more recent converts include Mitch Wagner, Gina Trapani, Dan Benjamin and Buck Woody, who all have their own stories of their transition and their own advice to offer.

My first standing desk was a precarious arrangement - a coffee table perched on my regular old desk: 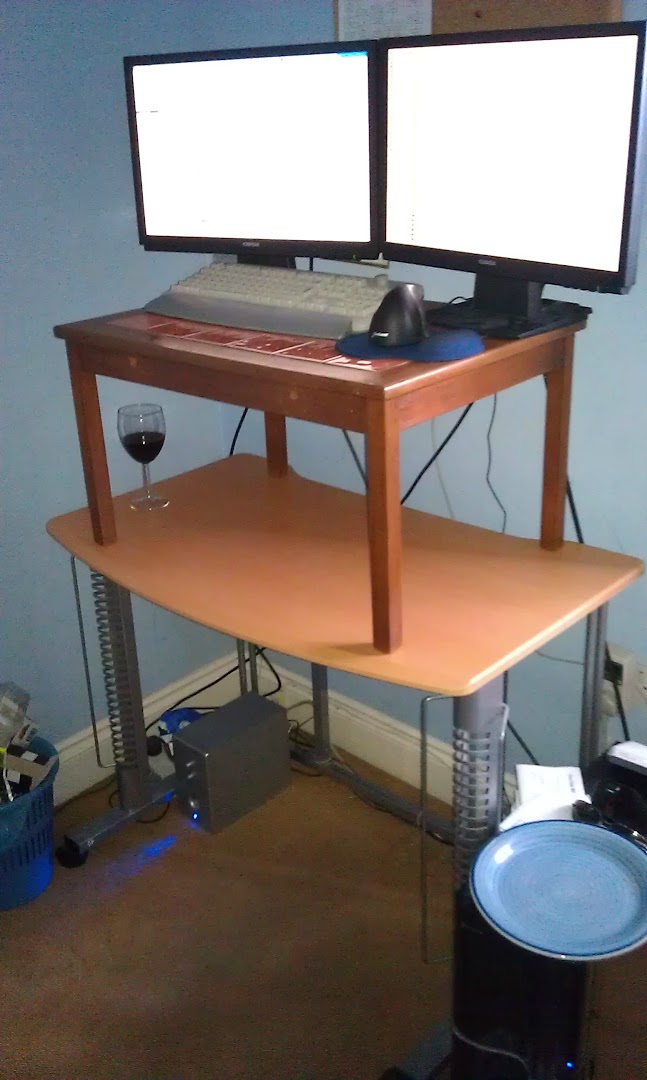 It was an interesting experiment, and a good cheap way to find out what all the fuss was about.

The first few days were hard going. I wasn't used to standing up for long periods, and my legs got tired fast. The first day I managed an hour. The second, two hours. Within a week I could do a day, with a break for lunch.

After a few weeks, I had developed some new habits. I was much more alert while working long periods, no longer suffering from tiredness after six or seven hours of work. I found myself wandering away from the screen to think about problems I was working on. I'd even started splitting my work into sections better - a couple of email sprints a day, for which I sometimes took the laptop somewhere more interesting. Even, occasionally, outside.

I discovered the urge while working to hop from foot to foot every dozen minutes or so. I quickly added a box under the desk to act as a footrest. I also bought a (unfortunately rather crappy) bar stool for the rare times when I wanted to switch to sitting. I didn't use it.

(I also started dancing while working. Only when nobody can see me, of course.)

Unfortunately, while the standing-coffee-perch-desk was good, it had its fair share of problems. It was a little too high, for one thing. Only by a couple of inches, but that was enough for my arms to rub on the edge of the desk, which became uncomfortable. It wasn't quite safe enough to be a long term solution either. So I decided I needed a replacement.

There are plenty of off-the-shelf options. Dedicated standing desks, DJ tables, and even the self-assembly option with parts from Ikea or similar companies. There's a great roundup of the best standing desks currently available over at The Wire Cutter. All very tempting!

In the end, though, there's nothing quite like the feeling of satisfaction you get from designing and building something yourself. It's a lot like web development, except there are fewer bugs and you can feel the end product.

As a quick aside, a recent thread on reddit's woodworking community seems to indicate that perhaps an enthusiasm for woodwork is fairly common among developers. Is that true?

The Solution: Make My Own

I knew the rough shape I wanted. I hadn't built anything in years, so I wanted to keep it simple. I also wanted to keep the cost down. So, off to the local wood recycling place I went, and picked up plenty of 2x4 and 1.5x3.5 lengths of used pine. I also splashed out on a couple of decent, non-recycled pieces of pine for the top and shelf.

Three weeks later (a few hours a weekend), it was all ready to use. It wasn't all smooth sailing, but it was a lot of fun. 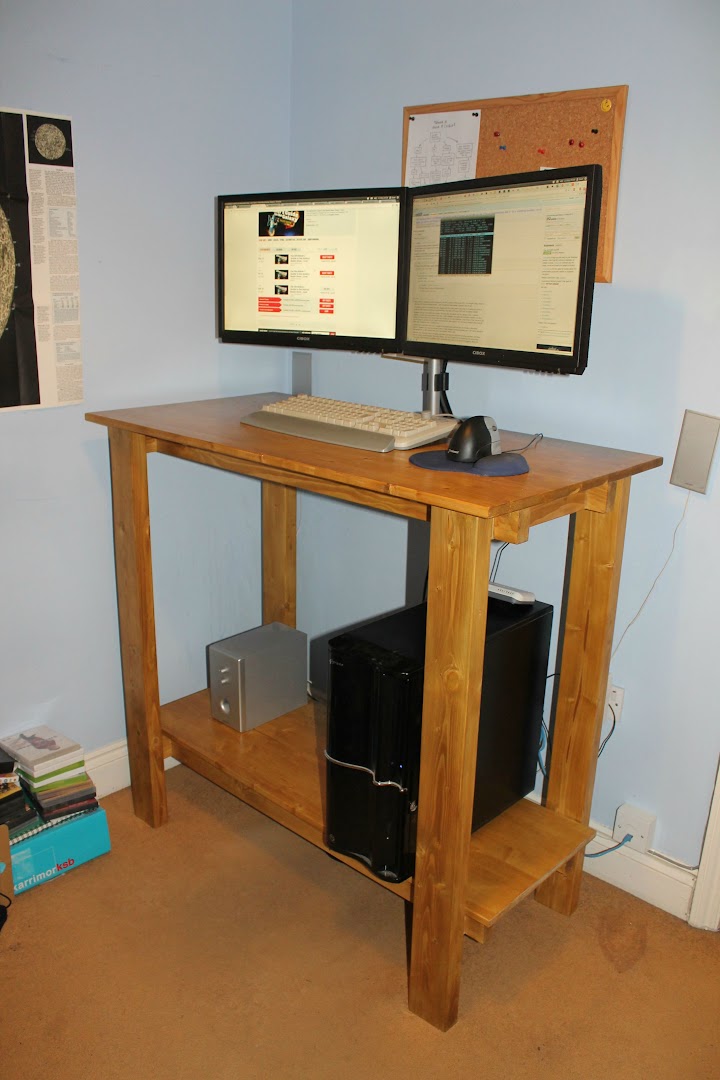 There are many like it, but this one is mine. Complete with my vertical mouse, another ergonomic improvement I can't recommend highly enough. My cork board may need some adjustment ...

The final desk has a couple of minor problems so far. First, it's creaky (varnish on varnish doesn't sound nice). It also suffers slightly from racking, though not enough at the moment that I'm losing sleep over it. A couple of strong wires crossed at the back should keep it together at least long enough for me to decide I want to build a better one!

Other than that, so far it's been great. A pleasure to work at, even after a day sitting and working at the office. So far, I've been more productive (though that might just be new toy syndrome), and I find it much more comfortable than my old sitting/slouching/napping setup. Now all that remains is to sort out that infinite supply of sandwiches and beer! 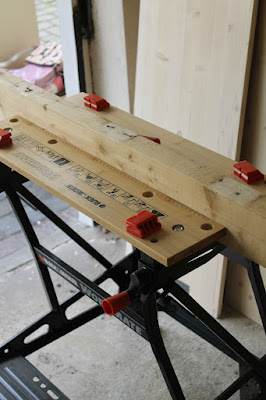 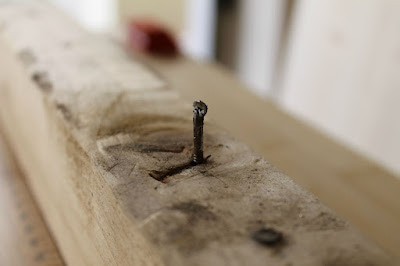 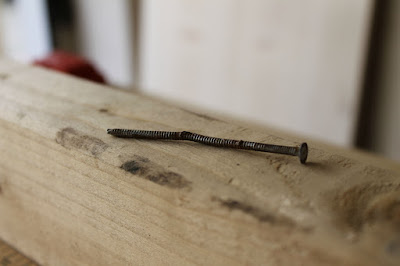 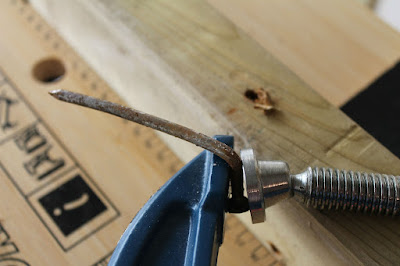 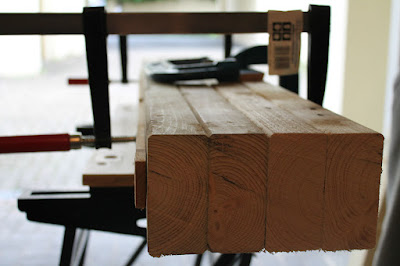 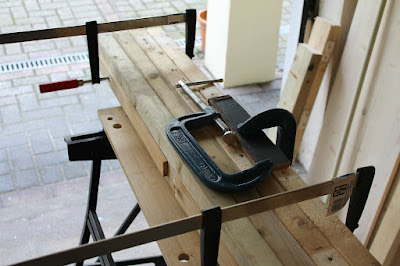 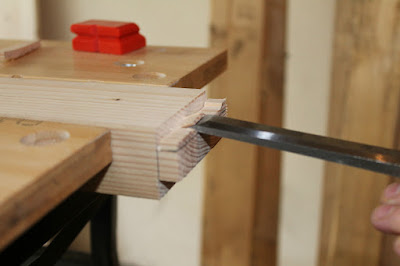 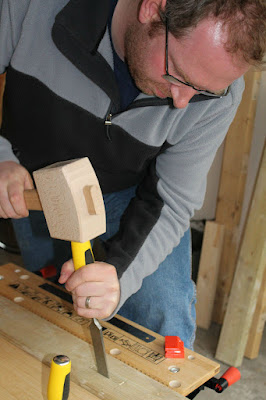 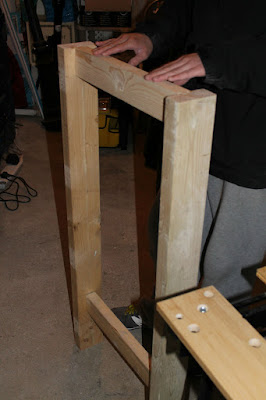 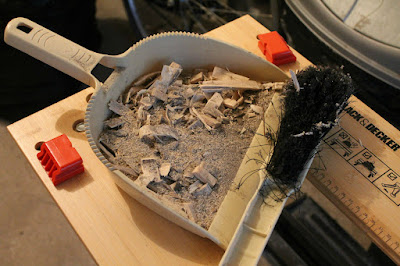 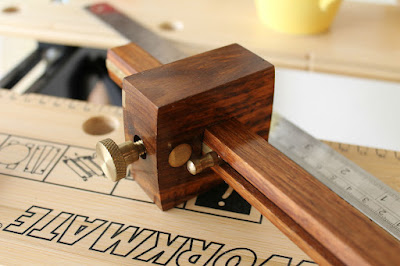 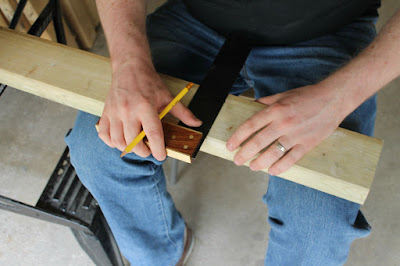 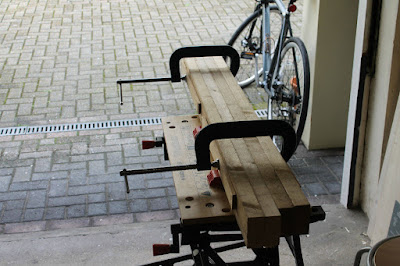 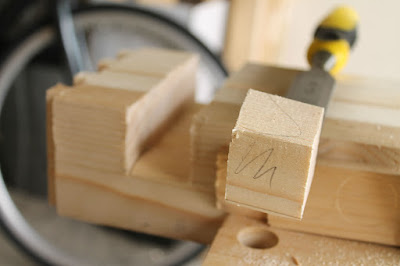 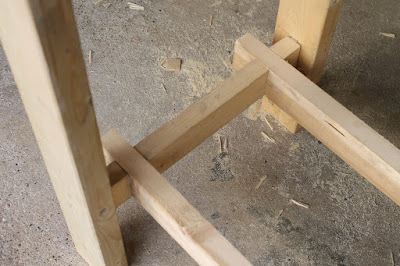 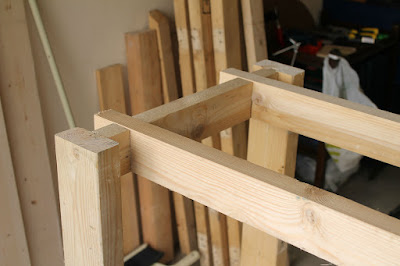 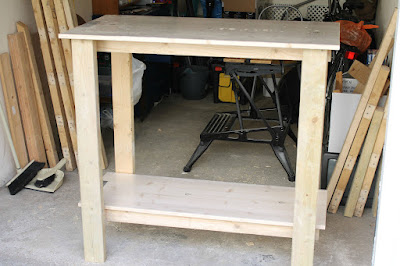 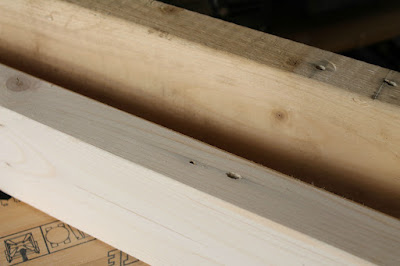 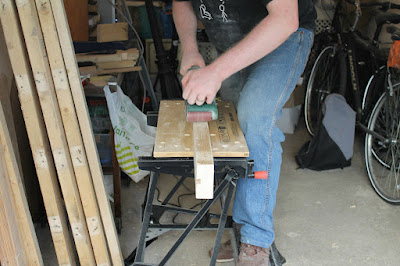 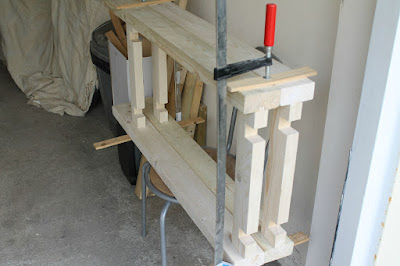 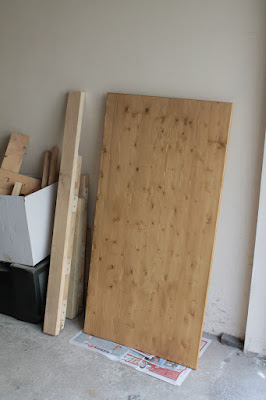 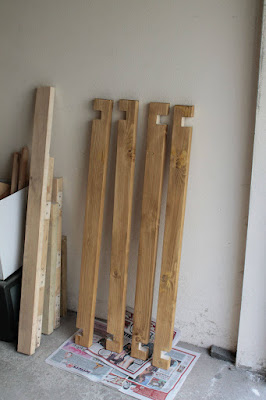 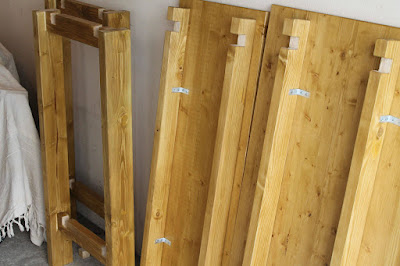 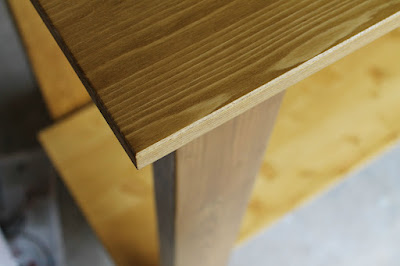 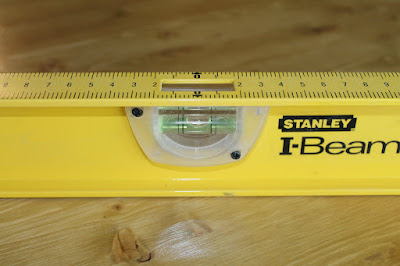 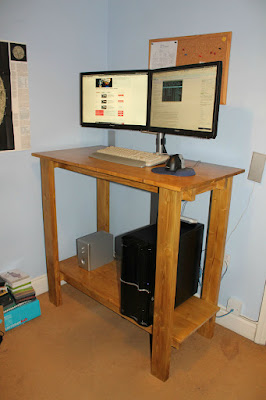