So, we've established already that Christmas trees are evil and insane, but the office still needs something Christmassy to cheer the place up. This year, that became more pressing as we had round two of the Added Bytes Awful Bauble competition.

The office has some features that made it a challenge. I couldn't build a hanging Christmas tree like the one at home, because the walls at the office are sloped, and we can't install a bracket even if they weren't.

However, the office does have some lovely huge beams running across the ceiling, with ample space to loop something over and aroun. A hanging tree is certainly an option ...

So I set to work building the next generation of hanging tree. Picard to 2019's Kirk. As it was hanging from a rafter, I decided to make this one more 3D, in the shape of a pyramid.

Once again, beer with Steve provided the answer to one outstanding question - could we do something better than the screws? Steve suggested small bamboo sticks might work. And he was right.

This was in many ways a far more challenging build. Cutting 60° angles on a mitre saw is not easy when it only cuts up to 30°. Cutting that accurately is even harder. Then drilling a hole at an angle without a drill press, harder again. I'm buying a drill press. And a table saw.

Unfortunately, I didn't think in advance to size the layers so they could nest conveniently for storage.

The bamboo (I used these 6mm rods) made it much easier to set up, and looks far nicer. One trick, if you're looking to do the same, is to use an imperial quarter-inch drill bit. That's 6.3mm, leaving enough room for the bamboo to move without getting stuck, but not so much that the bamboo slips out of the channel.

This was a great, fun little project. The triangle shape gave a lovely depth to the whole thing. And having it hanging in the room over the meeting table was a nice way to bring in some festive cheer without damaging the building or leaving tree bits everywhere. 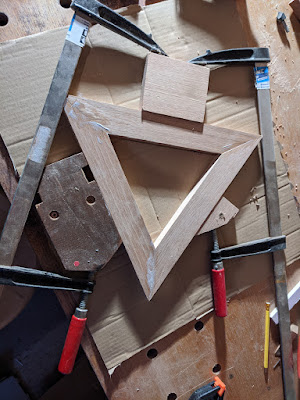 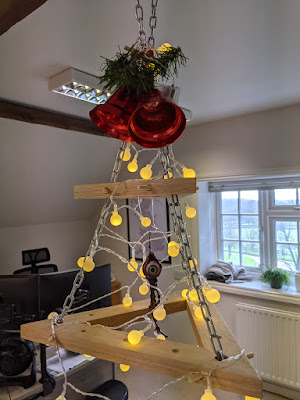