We have - or we had - a ritual in our house. You may have a similar one in your house.

Every year, near the start of December, we pile into the car and go to a garden centre. A place where life is celebrated, where you can buy any one of thousands of beautiful, and/or productive plants to bring colour or flavour to your world.

We go to this place dedicated to nature, and we head into the back. We ignore every one of the living plants along the way. And we head into what can only be described as a plant morgue.

In this plant morgue, a host of once-beautiful trees are arranged by height and species. We inspect them, looking for the one which looks like it had the most promising life ahead of it before it was killed. And we buy it, wrap it in a net, stick it in the car and take it home.

Once we get home, we take the tree out, stick it into a special holder that has no other purpose in our lives, drape it in sparkly things, and grin maniacially as over the next months the evidence it was once a living thing drains away, its branches wilt and its leaves fall to the carpet. Once we've had enough of it, we dump it in a pile of other rotting trees and spend the next eleven months hoovering up leaves. 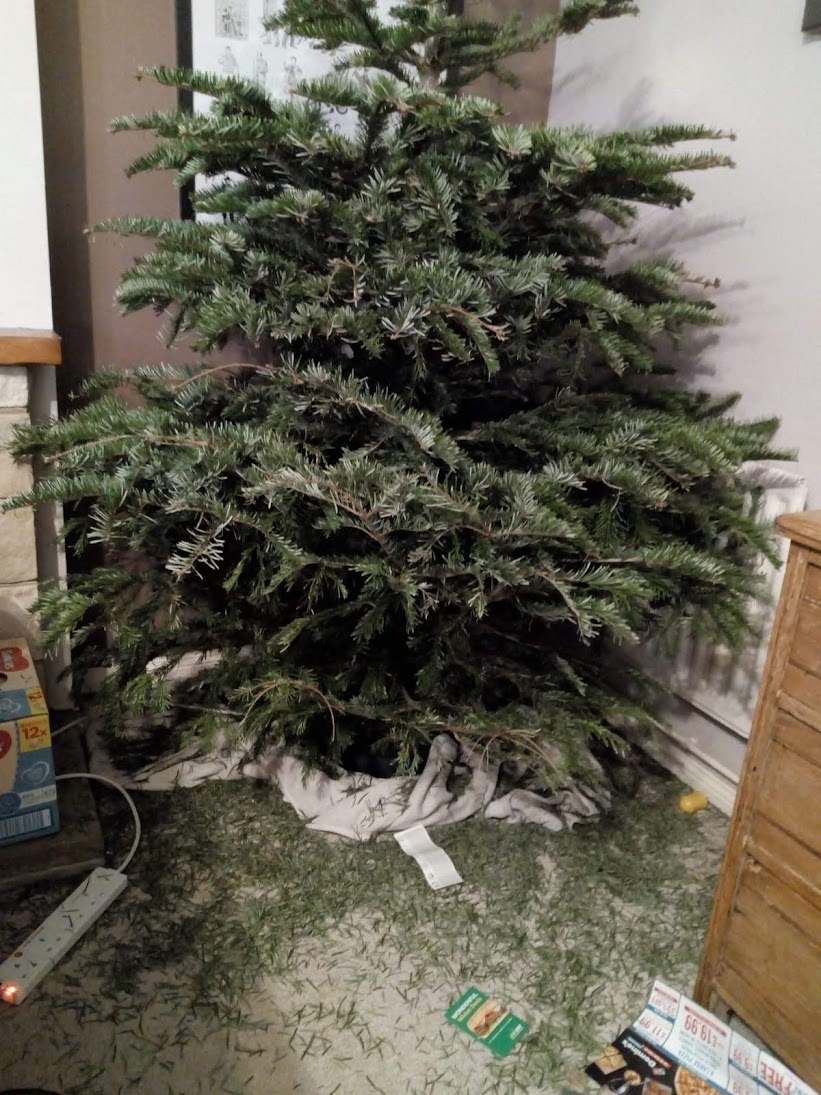 There are several problems with this ritual.

First, and most obviously, it is insane. If aliens landed on the Earth mid-December and you were the one tasked with explaining to them why everyone was chopping down trees to put in their house to rot, you'd not get very far before you asked them if maybe they'd consider visiting a different planet, as large parts of this one were clearly barmy.

Second, it's deeply impractical. Christmas trees take up a large amount of space, drop leaves all over the place, require you to buy and store specialist equipment, and none of that for any more than fleeting entertainment.

Third, these things are actually dangerous, causing hundreds of house fires every year. While they're not starting fires, dry Christmas trees are incredibly flammable.

Fourth, and most significantly, Christmas trees are hugely damaging to the environment. Trees which are not disposed of carefully produce greenhouse gases as they decompose. They are often transported large distances, which carries a carbon cost. They're linked to the use of hundreds of thousands of tonnes of pesticides. Farms that grow these trees displace other similar, but less Christmassy, conifers, which are facing extinction.

If those aliens were second-guessing their decision to visit at the start of this list, they'd be back in their craft careening away from the Earth and promising each other a staycation next year; anything but a return to this mad planet.

All of these thoughts had been rattling around my brain for years. But still, I went and dutifully bought my dead tree every year and built my little sparkly mausoleum.

I'd been trying to think of something else we could do as a family instead. But I had such warm and happy memories of Christmases from my childhood, complete with a real tree, that I couldn't see any decent alternative. Plastic trees are fine, but I've not yet seen one that didn't look tacky. Renting one was an option, but every time I tried I found I was far too late and all that was left was tiny trees. I wanted my kids to feel the magic of Christmas, to participate in some of the same traditions that we had as kids. I didn't want them to feel envious of their classmates who had Christmas trees, or put them in a position where they were class killjoys lecturing people on the evils of Big Christmas Tree.

In 2019, however, I had an epiphany. I had thought of building something a few times, but never managed to come up with a design I liked. I thought a series of increasingly large shelves, connected to each other with chain and mounted to something on the wall, might look like a Christmas tree, and might solve most of the other issues I had. Plus, as a bonus, the kids would have something unique and positive they could tell their friends about.

So here's what we ended up with: 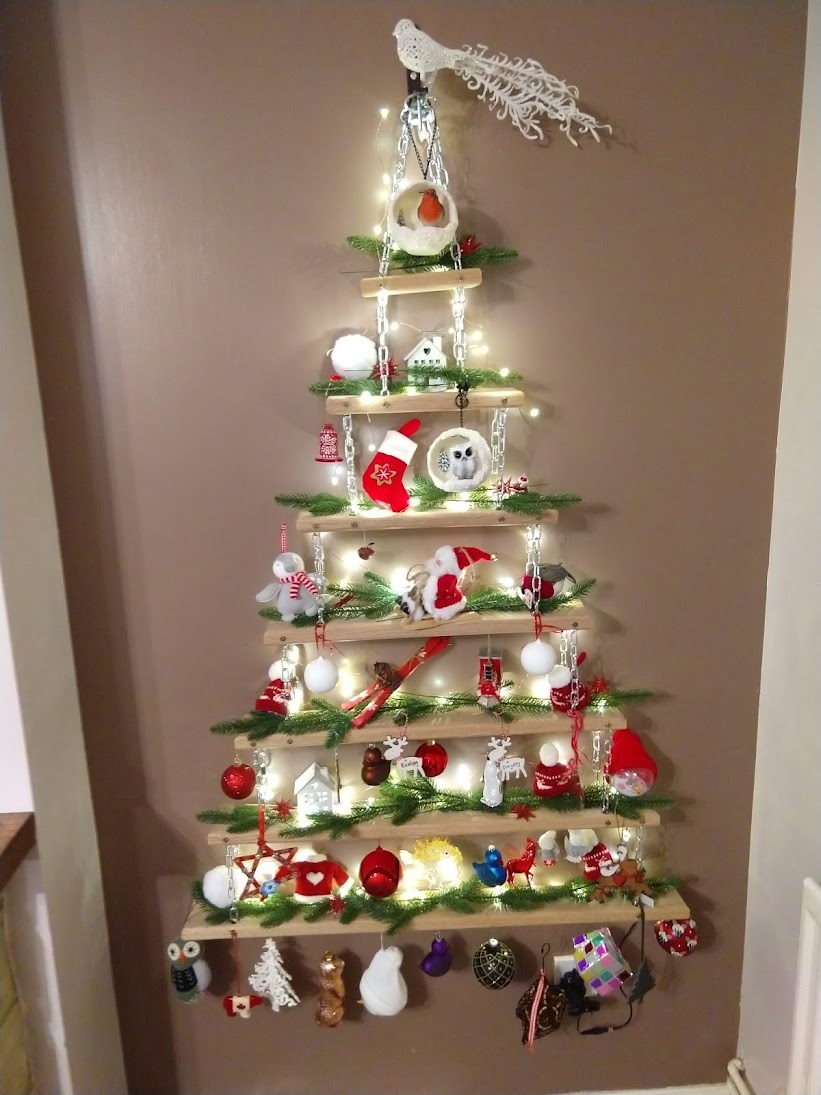 As you may have spotted, there were some issues with the first year's tree.

My friend Steve was the genius who came up with the idea of using screws, inserted from the side of the shelves, to "capture", the chains between shelves. The chains pass into holes at each end, which go most of the way through the shelf. Then from the side, the screw is inserted, which passes through the end loop of the chain and through to the other side of the hole.

All the chains are vertical, and at the top the chains converge to a mounting bracket on the wall. The rest of the year, the top screw that holds the bracket in place is a picture hook.

We added the usual decorations, and some fake greenery to give it a more Christmassy feel. We even found some Christmas tree fragrance sticks, which we secrete on the tree to produce that lovely new tree smell.

The photo above is from the first year, when the tree was a bit rushed. No finish is applied, some of the shelves are wonky, and there's a twist to the whole structure. 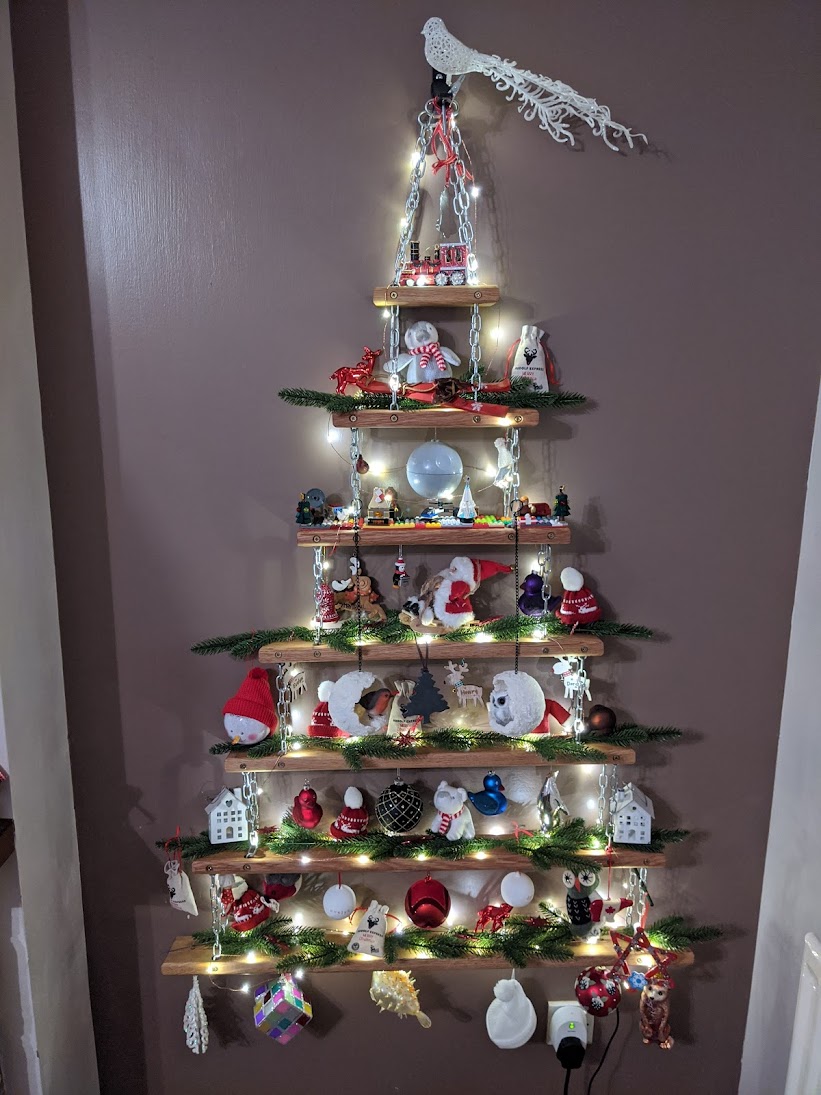 Finish was applied, screws were moved, boards were turned, and we added a new Lego shelf (the third one down) which the kids got to set up a little Lego Christmas scene on. Can't do that on a traditional Christmas tree! Although, their scene appears to involve the Death Star paying a visit to the nativity, so maybe that's not such a bad thing.

This new tree has some distinct advantages, which we've enjoyed so far:

I'm expecting that as the kids get older, we'll eventually get some pushback from them, and demands to go get a "real tree", but so far they've loved that we have something all of our own, and that they got to help create.

Edit: In 2020, I made a variation on this theme - a more 3D version. You can see more about that project in Pyramidal Hanging Christmas Tree.

Edit: In 2021 the lego shelf was replaced. I liked the idea, but the rubber lego mat we were using was a pain. It may return in future! 2021's tree: 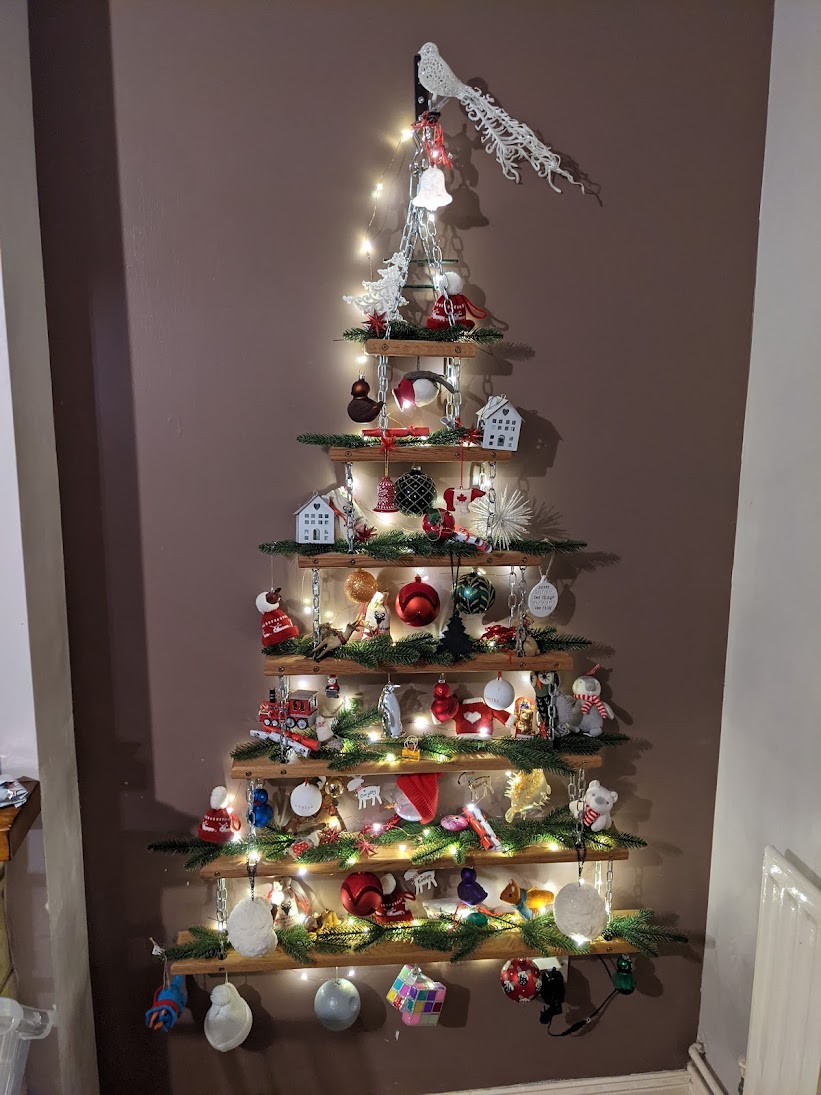 Edit: In 2021, I made a second tree for my mum, with some improvements. You can see more about that project in Hanging Christmas Tree - Version 2. 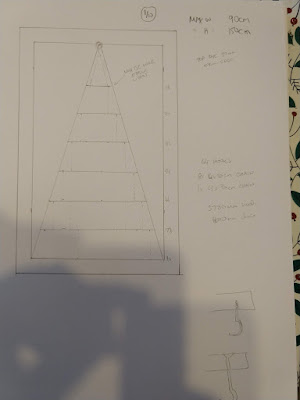 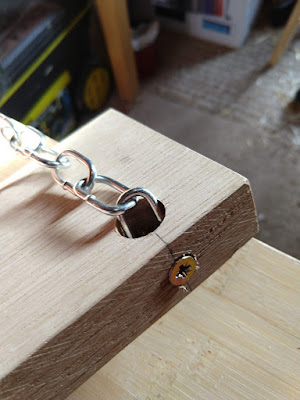 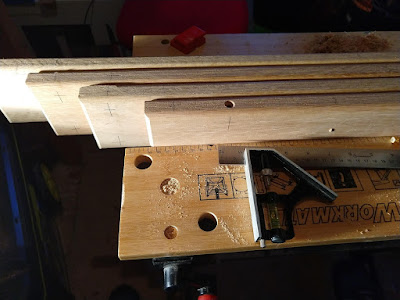 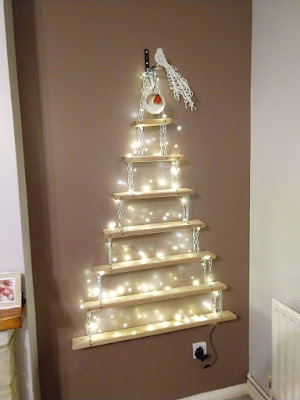 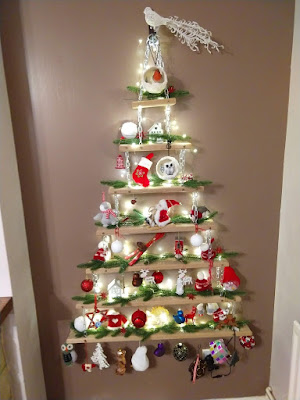 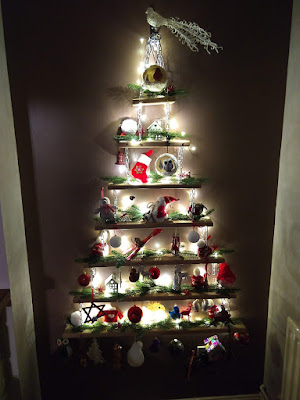 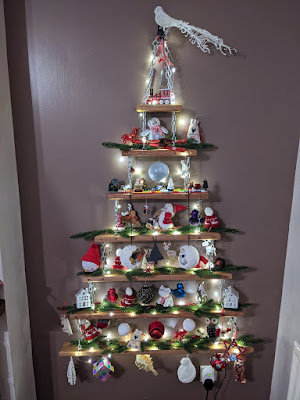 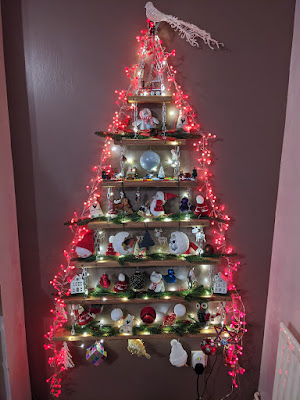 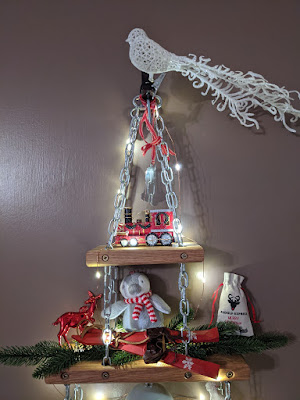 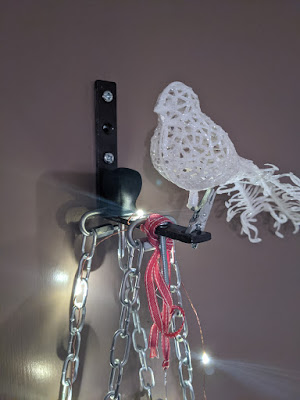 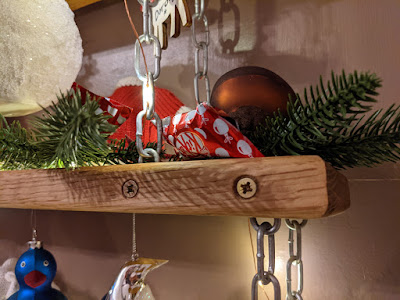